It strikes me recently that perhaps some of the people who have been running universities for hundreds of years might know what they're doing.

Christian, David and I have been working on basically reinventing the wheel in terms of what universities do for computer science students. This has been met with tremendous success, but at the near cost of our sanity and capacity to do anything else. We've successfully led 30 people through a computer science education by the hand, which is something universities don't do.

Universities expect you to handle your own shit. They're as involved in your affairs as you involve yourself in theirs. They don't check up on you when you're quiet. Professors typically don't notice when you don't understand something, and stay into the night drilling you on your data structures. Basically, they expect you to figure out when you need help, and also expect you to force someone to help you.

Our students are always type-a enough to be able to seek help in class, or for that matter in a workplace. However, they're new to a field that's so deep and frankly, lovecraftian in it's crazy hidden unknowns - they don't know what or when to ask. They don't know who to ask. They start out not even grasping the depth to which they don't understand.

Needless to say, we spend a great deal of time enumerating the order of magnitude of knowledge they're missing.

The gulf however, drives Christian and I to spend 14 hours a day here. We even have a rule, we're supposed to leave at 6 on alternating days. Neither of us follow that rule with any kind of regularity. Generally only when we're expected to be somewhere. But, on the plus side, our students completely floor our partners on hiring day, and their managers come first review.

Rarely, but it happens, I envy the life of a professor - I wish I could be as aloof and more detached than I am from the success or failure of my students. But, I'm doing something that matters. So many people can't say that. I also suspect that most professors develop that detachment over a great deal of time, and heartache. 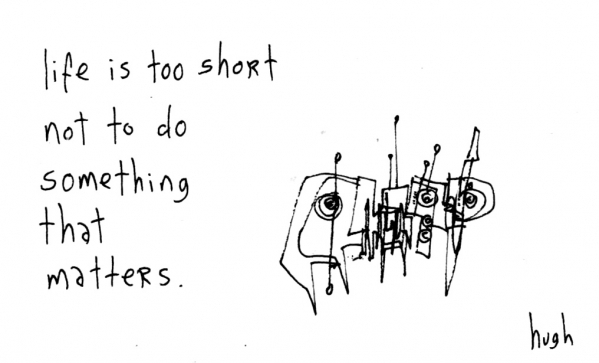